I have two twitter accounts. My craft one & my work one. On my work one I follow a few local businesses. Gee’s Restaurant is one of them. At the start of the week, they tweeted about a competition. I’ve won a few things on twitter, Albert being one of them. This week I won a lunch at Gee’s! I was so excited! Despite living in Oxford for three years, I’d never ventured to Gee’s so this was to be a whole new experience! 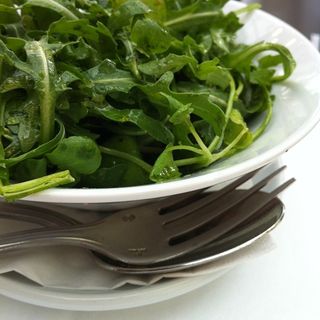 I loved it! The staff were all lovely. Nothing was too much trouble but they weren’t overbearing. We were allowed to have 2/3 courses from the set lunch menu. All we had to do was pay for drinks. Deal. The surroundings are exquisiute! I don’t think I’ve ever been anywhere quite like Gee’s. They are relaxed enough so that you can relax but formal enough to make it seem like it’s a bit of an event that you’re there!

Naturally I opted for the 3 course! I started with the mozarella and tomoato salad. This was really tasty & the best bit was the tomatoes. They’d use different varieties. Then I had the Peppers Piedmontesse (without anchovies). I had no idea what it was & was a little surprised to see that it was a pepper with a tomato inside. It was delicious & it came with the lovely green salad in the picture above. I didn’t want anything too heavy as I’d eaten quite a bit of bread while we waiting for the starter (which was gorgeous, came with real butter & there was lots of it!) plus I had my eye on the deserts. 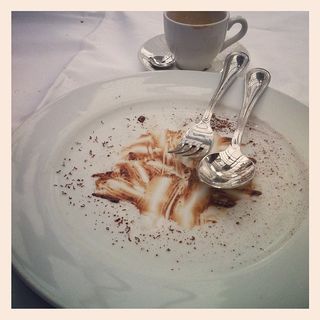 I had the Tiramisu. This was my choice because I’d never had it before and the other choices were sorbet (yuk!) & jelly (not veggie). I was not disappointed. It was amazing! Quite light & choclatey with not too much coffee.

I will definitely be going back. I wish I’d gone there for my birthday now! You can have such a lovely relaxing time, go somewhere fancy & it not cost too much. I liked all the food I had. When I asked about the main and whether it was vegetarian, the response was ‘no but I’ll ask chef to see what they can do’. Music to my ears!

Thank you so much for my free lunch Gee’s! I will be back! x